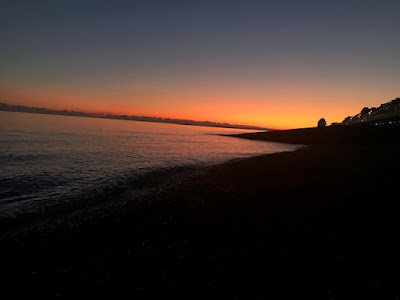 my hippy dippy days..I've been seeking out those friends who think outside of the box recently (which is most of them), one of whom never fails to find their local shaman, quaker, bonfire meditation or felt making moment wherever they are in the world. I joined her a couple of weeks ago on a silent walk/retreat/dance/gong bath (lets get it all in why not) day at Lulworth Cove in Dorset. I've had many lovely times here in the past, not least trekking around that giant naked chalk sculpture Cerne Abbas before finding I was pregnant with my son.

And so I joined Gill with 6 other women in search of meditative practice and the meaning of life....but not as you know it, whatever your name is cliche. I got into the zone. The women were lovely, we had burning sage cleansing smudge introductions, albeit in the pouring rain, and shared our stories in the village hall. I like a bit of burning herb cleansing, being brought up a catholic, it's familiar.

With my cringing, people pleasing tendency, my imposter syndrome kicked in: that I'd out trauma-d them with my impending death dilemma. I needn't have worried too much as others were ready to release their burdens through sobs and stories, and dance their way out inconsolable early childhood sticking points. I kind of sat and watched and tried not to labour my point.

Kind of unusually, I thought, the leader of the group shared her own worries about her own dilemmas in life, giving me a little angst about who was going to hold all these emotions swirling around in this Dorset village hall.

Before my initial diagnosis, 9 years ago, I had been studying herbalism, but quickly found myself swallowed up in the medical and scientific process of surgery ( that has saved my life so far ) and my herbalist telling me that to choose natural healing through herbs ( should I choose chemo) would be like sweeping with a little broom in the corner of a room after a major bomb had gone off. I went rapidly from making elderberry concoctions and collecting yarrow for healing wounds to 70 stables holding my torso together, and major class A pain killing drugs including 5 day epidurals, morphine and tramadol. Luckily I sidestepped chemo but herbalism, nonetheless got relegated to the little painted Ikea drawer of dried herbs in my hallway. This time, given the news that no medical intervention would improve my quality of life, I decided to seek out my old herbalist teacher. Worryingly, she had been through her own 9 years of life traumas, relationship breakdowns, cancer, surgery, ( and chemo). She said she was in the eye of the storm and I ended up counselling her on a warm and balmy, wine infused Brixton evening, over the sushi. Back to the drawing board then.

So I joined the women in Dorset with a little trepidation. We set off on our silent walk during the Hunters' Moon to reach the top of Durdle Door in our rain coats; or in my case an absorbent puffy jacket ( warm though).  We had been instructed that there would be no talking unless there was an emergency. All good then, and I am a good walker, except I hadn't realised we would be scaling the sheer outer edge of the cliff and its muddy gorse rather that the touristy steps bit and I soon got puffed out. Not wishing to be a the attention seeking member of the party (again) I assured the other 'disciples' they could go on ahead, but of course the leader said she'd stay with me while the others continued and that we would catch up. Mortified that I'd been the one to break the silence, and keep her behind from the rest of the party, the two of us straggled behind, me huffing and puffing and trying and failing to be silent : 'I'm sorry, I'm fine on the flat, its just verticals'..... silence....oops. 'Don't be sorry, you've got a fucking tumour on your diaphragm!

Coming down was even more hazardous and as we reached the bottom I slipped on a muddy rock, landed straight on my butt, saving myself with my arm in an almighty crash as the rest of the party waved at us from near the hall, having taken the steps back down. The pain searing through my arm and shoulder put me into such a shock, I thought; "oh fuck and now I've broken my arm too"  Another failed attempt at monastic silence. She looked at me with a kind of " you had us at the incurable disease stage- you HAVEN'T broken your arm" kind of stare. She was right.